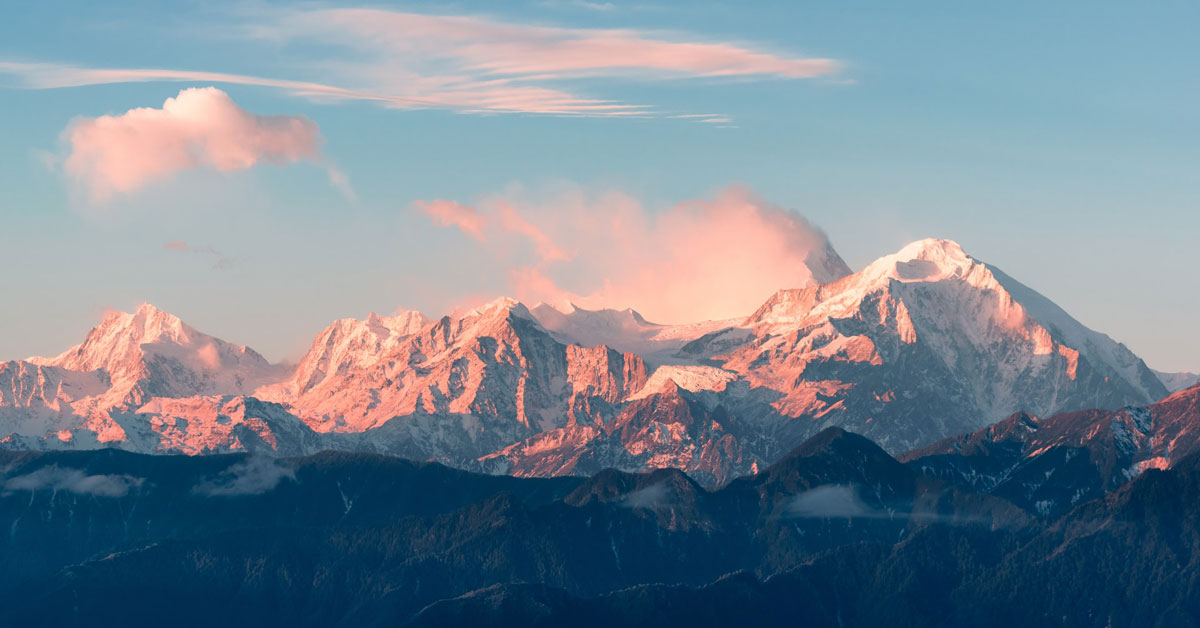 Making the transition to mountain climbing may seem like a daunting task. If you’re like me, still having climbed only a handful of mountains and never breaking the elusive 6000m barrier; this blog is for you; The 5 Best Himalayan 6000m peaks, perfect for transitioning from trekking to Mountain climbing.

There are many treks/climbs that can get you close to 6000m, such as the Everest Base Camp Trek, Kilimanjaro, and the Annapurna Circuit Trek. Though they have snow and mountain passes, I am going to categorize them under High Altitude Treks. After being stuck under the 6000m altitude ceiling for a while, I decided to start looking for my first trek/peak to break that barrier. I was looking for something relatively easy, sans any major mountaineering skills, and lastly, easily accessible. The thought of wandering the mountains to access a remote unclimbed mountain did tempt me, but asking for a month of leave to get lost in the mountains and find yourself, is quite the sell to give to my boss. (Unless you, the reader, can convince him).

I began to realize the merits of exploring established 6000m peaks, especially as I had no idea how my body would react to this elevated altitude. In addition, this would also allow me to hone my mountaineering skills especially as it’s been almost five years since I had qualified from my mountaineering school, HMI Darjeeling. A refresher would definitely help. So after some research, here’s a list of a couple of mountains that fared well in the criteria I had set.

My sights were first set on Ladakh, having spent several holidays in this incredible high altitude desert. I fell in love with this unique terrain during my visits and so my research led me straight to the highest peak of the Stok range, visible from the moment you land into the city of Leh, Stok Kangri standing at 6153m above sea level.

Stok Kangri is a majestic peak, with an easy approach from the Stok Village. The Base Camp can be reached in 4 days and you can be back to Leh in 9, provided you are blessed with good weather. The route is relatively easier with a comfortable approach and a direct route to the summit along the eastern shoulder. With one glacier crossing, the summit push is sure to get your adrenaline pumping. After traversing through the glacier, you follow the ridge up to the summit. Depending on how hot the summer was, you can find large or no snow on the route. Like any other mountain, the summit push requires a midnight start to reach the summit early in the morning, by the time the sun rises. This forced march will be a true test of your endurance.

A popular mountain climb for beginners, Stok Kangri had to be closed due to excessive littering and pollution by trekkers. With companies disregarding the environment, the local district authorities of Stok were forced to close the mountain to allow for the ecosystem to recover. Officially, the mountain will be remained ‘closed’ till 2022.

With access to Stok Kangri being restricted for the next few years, my focus shifted to other possibilities in the district of Ladakh.

Kang Yatse (or Kang Yatze) is a peak located in the Markha Valley, in the Hemis National Park. It has two summits, namely Kang Yaste 1 and 2. Kang Yaste 2 is the shorter one at 6,270 m and is a more popular summit due to a relatively more accessible approach route. Ever since Stok Kangri was closed, Kang Yaste -2 has increased in popularity as ‘the peak to climb’ in Ladakh. You can reach its base camp using two routes; either from Skui or from Chang.

I have intentionally excluded Kang Yatse-1, due to the relatively technical nature of the climb. With a higher elevation and a narrow approach route, this peak requires much more technical mountaineering experience. To reach the summit, one has to traverse a knife-edge ridge and is a little dicey.

Kang Yaste 2 itself, is not a technical peak, with the route following the western ridge most of the way to the summit. The best time to climb the peak is from July to September. This also has a lower cost to climb and is perfect for your first 6000m peak. With a short itinerary of 13 days, it is perfect for a tight schedule. It also gives you a chance to explore Markha Valley, with its lush green terrain, it’s a good change from the rest of Ladakh.

During my research, I was pleasantly surprised to stumble upon Kang Yatze’s undiscovered brother, Dzo Jongo, a peak standing at 6240m located near Kang Yaste. The mountain has two summits namely, East Summit and West summit.

From my research, I could not find too much about the mountain. Dzo Jongo does share the same route as Kang Yaste and both base camps are located close to each other. Dzo Jongo is considered by many as an easy peak to climb but is most definitely not. As it is less commercial than Kang Yaste, information on the conditions and routes can be hard to find, especially for the season you are climbing in. Our team at Adventure-Pulse had climbed the mountain back in 2017. High Camp was set off the glacier and below the snow line. The route to the summit started from the left of the glacier, then a steep, knee-deep snow climb to the right shoulder followed by a scramble up an exposed ridge to the top.

Having done the Everest Base Camp trek last year, I was extremely keen to explore the possibility of climbing a mountain in the same valley. That way, it allows you to make the most of your experience while trekking insight of the highest mountain in the world. My research immediately led me to Lobuche Peak, standing at 6,119m above sea level, considered the most popular trekking peaks in Nepal. On the trail to Everest Base Camp, the route starts from the Lobuche village and makes its way to the summit via two camps; base and high camp. With unparalleled exposure and a breathtaking summit climb, Lobuche gives your mountaineering career a dramatic start.

Climbing Lobuche gives you visibility of the Everest Valley, especially the famous Khumbu Icefall at the foot of Everest. The spring-summer climbing season will attract climbers from around the world who come to climb this mountain, often referring to it as the Chamonix of the East. You can comfortably combine the climb with a trek up to the Everest Base Camp as well. The route involves a 7-day trek to Lobuche Village followed by a short hike to reach Lobuche Base Camp. From this camp, it’s a 4-hour climb up to the Lobuche High Camp, usually set up just short of the snowline. Lobuche High Camp is my favourite camp, with spectacular views of the lower Everest valley and several glacial lakes. From high camp, we set out early in the morning, reaching the summit by sunrise. The climb itself involves a steep ice climb at 5800m. The fixed ropes will assist you to get the top. Understanding basic mountain ascending techniques like jumaring will be useful. However, the Adventure Pulse team usually ensures that an entire day is dedicated as a refresher course, to practice ascending and descending techniques before undertaking the summit.

As expected, I have saved the best for the last, a habit that has held me in good stead since childhood. Island Peak or Imja Tse (6,189m) is Lobuche’s cousin. Also located in the Everest Valley, Island peak has gained popularity over the last couple of years as a training peak or acclimatization peak for Everest climbers. Island Peak gets its name from its appearance when viewed on the approach march from the village of Dingboche. It was first climbed in 1953 by the British Everest Team as a training peak.

The route breaks from the Everest Base Camp trail at Dingboche. A short hike later, you reach the village of Chukkung. As you pass the village of Dingboche, heading towards Chukung, Island Peak dominates the head of the valley, appearing like a huge island of ice and snow, completely detached from the surrounding peaks. After a night in Chukung, you make your way across the glacial moraine of the Imja glacier to Island Peak Base Camp located at the south of the mountain. The route follows the 1953 expedition and follows the southeast ridge to reach the summit. Unlike Lobuche, Island Peak has some big crevasses and a near-vertical ice climb at 5,900m. This is where most climbers fail. Since you head for the summit early in the morning and by the time you reach the climb, you’re already gassed. The climb progresses from difficult to almost impossible. With the assistance of fixed ropes, brilliant Sherpas, and willpower, the climb is doable and makes reaching the summit more fruitful. From the summit, Everest, Lhotse, and Ama Dablam give you their blessings and the view is more than worth the climb.

This list is a starting point for your research. Climbing a mountain especially one higher than 6000m requires proper planning and preparation. No mountain must be underestimated. A trek to the Kashmir Great lakes is not the same as a climb to Dzo Jongo. On a climbing expedition, a mistake can have dire consequences. If you plan to go with an agency or operator, make sure you do your research and know what you’re signing up for.

If you have any more peaks that should be added to the list or have climbed them yourself, please feel free to mention it in the comments below.

3 thoughts on “5 Himalayan Peaks to break the 6000m barrier”