Treks around Bangalore: The 5 best treks near the ‘Silicon Valley of India’. 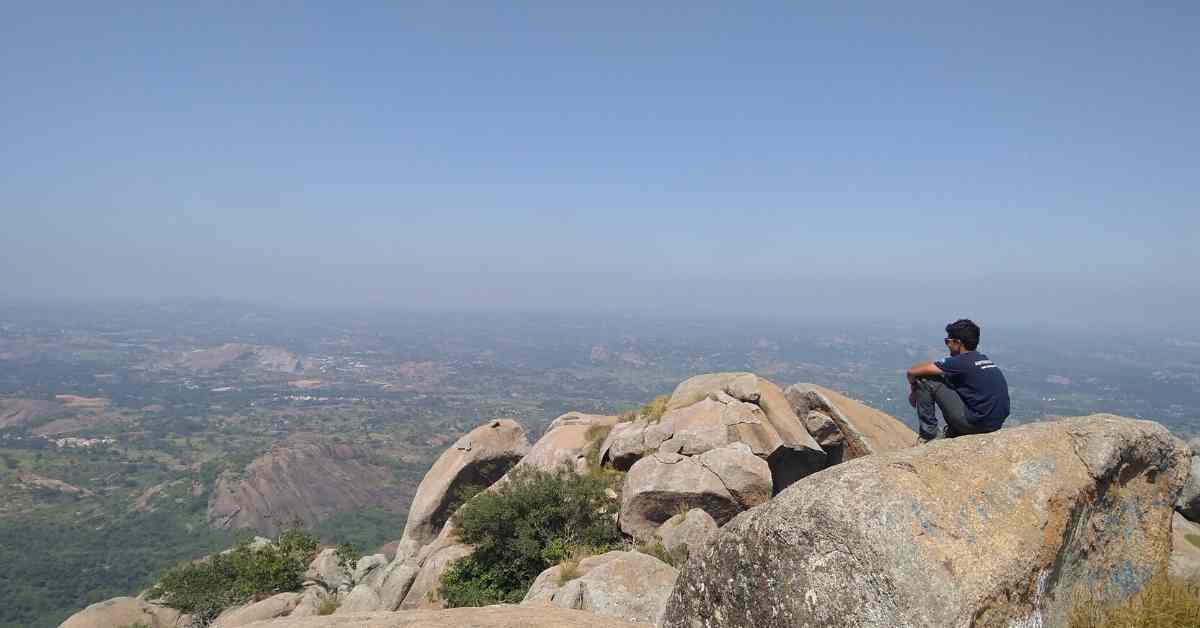 The Best Treks around Bangalore are not often talked about and published. Bangalore is more popularly known as the ‘Silicon Valley’ of India for being a major IT hub of the nation and the capital of Karnataka. It is famous for a lot of things, from startups, IT parks to the beautiful Lalbagh and Cubbon Park. With a large adventure community, Bangalore also has a plethora of treks that are present on the outskirts of the city. The best treks near Bangalore are usually around big granite monoliths, a unique feature found in this region. These treks around Bangalore are in the easy to moderate range with even some options of famous night treks.

A WEEKEND GETAWAY – TREKS AROUND BANGALORE

My favourite, which I personally rate as the first on the list for the best treks around Bangalore is the SAVANDURGA TREK. With the unique distinction of being the largest monolith in Asia, SAVANDURGA is a beautiful trek near Bangalore. This incredible Monolithic rock trek near Bangalore is located just off Magadi road around 60kms from the city. With an altitude of 1226 metres, the monolith is truly a majestic sight. The trail starts from the temple at the Base. You make your way towards the right of the temple and find yourself at the base of the monolith. The trail is decently marked. The route takes around 2 hours to the top and 1 hour back down. This trek near Bangalore is a must-do for anyone.

In fact, when I explored this trail for the first time with Adventure-pulse, I was joined by several families with children as young as 6-7yrs. My only word of caution from my experience is to trekking in the peak afternoon as the heat can make it pretty difficult. As this is one of the best treks around Bangalore, don’t be surprised if you find small crowds of people also trying to escape the city and explore the trek. Be careful of the monkeys.

This is one of the closest and the most popular of treks near Bangalore. From my experience, Nandi Hills is the perfect place for an introduction to hiking as it is an easy trek. NANDI DURGA OR NANDI HILLS is historically unique with parts of a fort constructed by Tipu Sultan in the 18th Century. One of the most sought after treks around Bangalore, it is perfect for families or people looking to relax in the lap of nature. NANDI HILLS is a mixed trail with green vegetation and scattered boulders. The trail starts at a eucalyptus grove and makes its way up through thick vegetation. The trail has man-made steps for some parts. You can also carry some food and have a picnic en route, however, remember to leave no trace in the form of wrappers and non-biodegradable waste.
As always, my only caution is that you must be prepared for crowds. Due to a motorable road access to the very top of the hill, bikers and cars frequent this destination in the often. I personally recommend an early morning start.

Featuring on my list of The best treks around Bangalore is SKANDAGIRI, with an altitude of 1450m. SKANDAGIRI is near Nandi Hills and is part of the same hillock system and is about 19kms from Nandi Hills. The Trek up SKANDAGIRI, is my recommendation for people looking for a short trek near Bangalore and who want to avoid the crowds of Nandi Hills. The trek is popular as a night trek and is famous for views of the sunrise. The start of the SKANDAGIRI trek is at The Papagni Temple and is about 6 km from Chikkaballapur. The trek is around 4.5 kilometres long and it’ll take you around 1.5hrs to get to the top.

Also on my list for the best treks around Bangalore is Makalidurga. Makalidurga is a hill fort around 60 km north of Bangalore and 10 km after Doddaballapura on the way to Gauribidanur. The fort at the summit has an old temple of Shiva with Nandi and in legend Markandeya Rishi performed penance here. Makalidurga Fort stands at the top of a huge granite hillock, huddled up amidst the chains of hills. It has a fort on top, at a height of 1,117 m. The trail is similar to Skandigiri with scattered bushes and rocks. The trail is pretty well defined. As you climb higher, the greenery and shrubbery reduce, exposing only the rock below. There is a Krishna Temple at the base of the hillock and marks the start of the trek

The final trek on my list for the best treks around Bangalore is the Madhugiri Fort Trek. The Madhugiri Fort trek is an extremely popular trek near Bangalore. Madhugiri is located in the Tumkur district and is about 100kms from the city. The fort is famous for its architecture and was built by the Vijaynagar Dynasty. The word ‘Madhugiri’ literally translates to ‘Honey-Hill’ and so the name is derived from the Honeybee colonies that lived in the area. A moderate level trek with a steep gradient, the trek also has steps that make the trail easier.

Once you reach the top, you can wander and explore around the fort, with marvellous vistas along with panoramic views. The initial part of the Madhugiri Fort trek are regular steps that lead to a bastion. The second stretch is made up of stairs created by carving directly into the rock. This leads to the hardest part of the trek as the gradient becomes moderately steep. A must-do for trekking and history buffs alike.

BE SAFE- PLAN WELL FOR YOUR TREKS AROUND BANGALORE

3 thoughts on “Treks around Bangalore: The 5 best treks near the ‘Silicon Valley of India’.”