THE MOUNTAINS ARE CALLING… 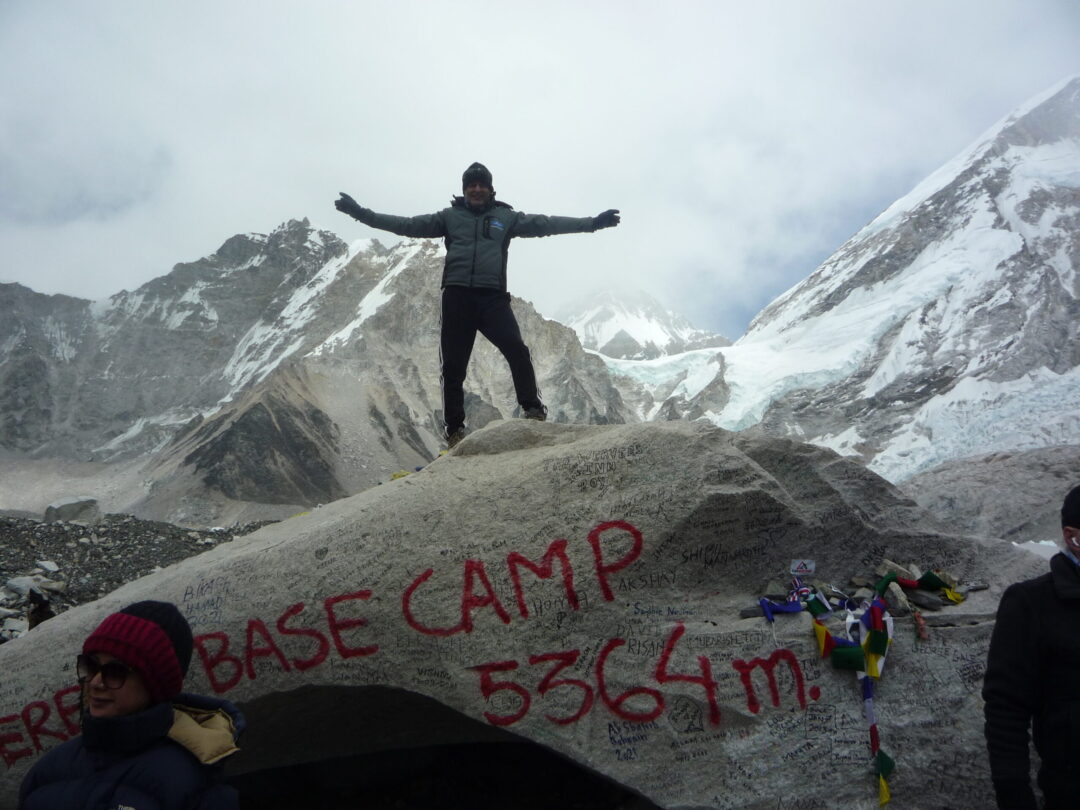 Rediscovering my connection with the mountains – A journey into the unknown!

It had been over 30 years since I had stepped foot onto the mountains. My last adventure had been interestingly in the Himalayas leading a group of 15 year olds around the Annapurna Mountain way back in 1997 when the concept of connectivity, Sherpas, etc. was a luxury. While I continued my general fitness goals and led an active lifestyle the mountains were left behind. Exactly a year ago a friend of mine mentioned The Kashmir Great Lakes and in a moment of weakness, I said HELL YA – let’s do it. Little did I know that this would be the beginning of a crazy 12 months that included successful completion of the Great Lakes trek, a busted knee on the final descent, a period of 6 months of Exercise Therapy Rehab at Invictus, and then an attempt of Everest Base Camp & Island Peak in April this year.

The Kashmir Great Lakes Trek, abbreviated to KGL, was a great return to the mountains. It was just the right amount of tough moments and lots of enjoyable ones. To see Kashmir in its splendor once again was such a pleasure. It also gave me a good sense of where my body was at (small secret – I am well on the other side of my 50’s but determined to make 50-60 the best years of my life!). I also got a sense of where I was in terms of my knee which I had busted due to excessive running a few years ago. From being able to do 15 Km comfortably I was down to 500 meters!!

Having successfully completed the Kashmir Great Lakes Trek, I then found a really good rehab program using exercise therapy. Entered 2022 in good shape and it was time for the next challenge. I had in the meantime found my 2 hiking buddies during KGL and one of them proposed Island Peak. He had attempted Stok Kangri a few years back and wanted to do another peak. Once again, without any idea of what I was signing up for, I said ‘ HELL YEAH’ let’s go for it. I had no idea what it meant to climb a peak, and as I was soon to find out, it was ridiculously challenging and ultimately a ‘bridge too far’. The plan was to do Everest Base Camp and then attempt Island Peak, a 6000+ meters.

THE EVEREST BASE CAMP – NEPAL CALLING!

After a good 3 months of intense preparation and we embarked on this journey of discovery into the known and then the unknown.

Trekking with Adventure Pulse always has a lot more adventure than you sign up for, in a good way I must add.

Rough weather into Lukla meant that we had a choice to either do it the expensive way or the original way. I am glad we chose the latter and ended up in the footsteps of Edmund Hillary and his team who discovered this route to Everest decades ago.It meant that when we reached the business end of the EBC trip we were all very well acclimatized and ready for the final assault on EBC. Completing that successfully, was ideal preparation for the assault on Island Peak, at least that is what I thought. I was so wrong!!

The scene was set, the day before was really bad weather and we feared the worst on D-day. At Island Peak Base camp, there were a small bunch of people attempting the peak. The weather on D-day was perfect and we left just past midnight. We reached the base of the mountain and I looked up and it then hit me ‘ climbing a peak was no mean feat. Forget making it to the summit, even setting myself up to attempt the summit was going to take something special. Deep breath and we began the climb.

We were 2, under the able guidance and care of Samir Patham, Chopel, and our guide. So I could not ask for a better support system. Samir had broken up the attempt into 5 phases I think. Successfully completed phase 1 and was onto phase 2. Was struggling a bit with my footwear – a piece of advice – spend a lot more time on getting the right footwear on before you embark, it can be the difference in the end. Was struggling to get grip on the icy rock faces and had a few uncomfortable slips and slides that dented my confidence. Realised that it is so important to be confident in the mountains – once that is shaken, it is important to stop and re-gain the same before moving on. There is room for fear, but only to the extent that it prevents complacency, keeping us honest and humble – however too much fear can also be detrimental and lead to a breakdown. Finding the balance is so important, I feel.

After a tough climb, we finally reached Crampon Point and this is where the serious business of climbing begins in earnest. This is now territory that is completely foreign to the uninitiated. One is climbing through snow and trying to get a grip on the ice below.  I began fairly confidently but then all hell broke loose. ‘ Slip Sliding Away’ was the song that kept playing on loop, as I went up 5 steps and back down 3!!! It was a struggle and I was spending so much energy just staying in the same place – It was frustratingly crazy and the only way I was making progress was by being dragged up by the lead sherpa – we were all on a ‘leash’, if you get my drift!

Struggled up and finally made it up to the point where we had to take a call, whether to attempt to climb the vertical wall that would lead us to the final summit push or to head back. The golden rule in the mountains is that it is not about just making the summit but also making it back home safely and if there is any doubt about the latter, one turns back. This is where you lean on the judgment of the leader and Samir felt that we were done and this was our summit at 5800 meters!!!

Higher than I had personally gone ever before and hence already a huge achievement in itself. Coupled with a successful EBC trip, this was my summit. Turned back and began the long journey back to base camp. The body and mind are too exhausted to even feel anything – All you want to do is to get back home safely to your family and that is what I did.

Some things that stayed with me after this experience –

1. The Mountain allows you to be in its midst – never take it for granted and pay it the respect it deserves.

2. Not everyone makes it to the summit. The phrase ‘ the journey is the destination makes even more sense now.

3. Get back home to your family – safe and sound – they are waiting for you

4. There is a strange all-consuming power in the mountain that overwhelms you. It can take at least a month to shake off.

5. It is all in the mind -we have no idea what we are capable of. You will never know unless you try.

6. Find a group that you trust, literally your life – as it is dangerous out there – and if anyone tells you otherwise, he or she is kidding.

7. Be humble, fearful, and confident – if at all that is possible – to me that is the perfect combination and I would argue the only one that works.

Will I put my body and mind through another one of these – honestly I do not know. I am just about recovering from this one. However, one thing I certainly did was push myself closer to my limit and had no regrets whatsoever about not making it to the summit – It is an experience I will never forget and even now struggle to describe.

I went into the unknown and discovered a little more about myself. This is priceless.

Trekking in the Sahyadris – 10 Mistakes to Avoid During Monsoon »