Swati’s journey to Everest Base Camp 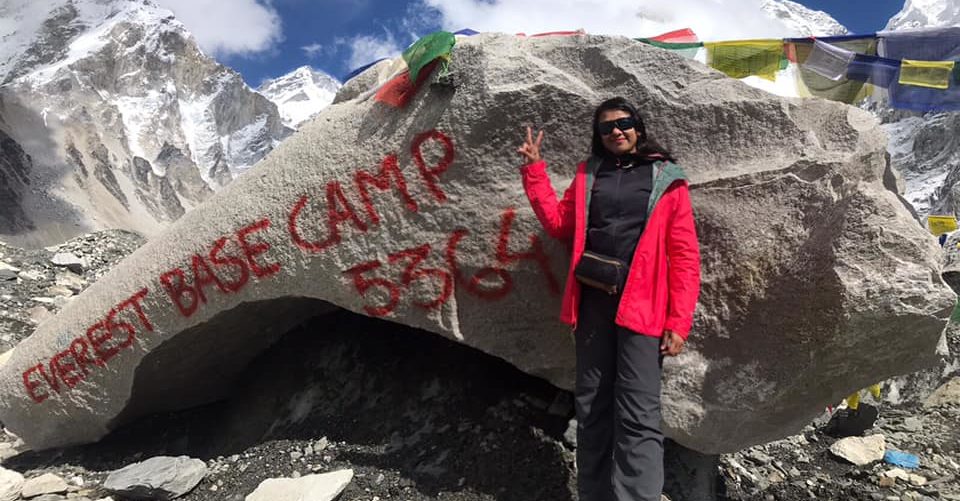 This is from our series: Letters from our travellers. Here is Swati’s Journey to Everest Base Camp during the first week of October. Enjoy!The tallest mountain in the world is also a treasure trove of life lessons. Here’s an account of a trek to Mount Everest base camp and a fortnight in Khumbu, that changed how I see my life.

It all started when out of various places, my childhood buddy Ritu Agarwal casually suggested to do the trek to Ebc which I agreed readily and I later convinced my didi Monika Agarwal and friend Shalu Gupta giving weird reasons and most beautiful part is that they both agreed by my those reasons 😉 and that’s how we started with our tour of lifetime..

At that time, I had not given much thought about the logistics or the difficulty level of this trek. Little did I know that it was a 12 day trek with a medium-hard difficulty level.

“So have you trekked in the Himalayas before?” asked our guide Lakpa when I met him for the first time in Kathmandu. “No, not for days in Himalayas, but I have done some one-day treks,” I replied sheepishly. “It’s okay. It’s okay,” he said smilingly. Now, I wondered : was it really okay !

It was my cherished dream to witness the tallest peak in the world. Initially, the trek was only a means to reach my goal of seeing the Himalayan Emperor up close. Only after we embarked on this journey did I realize that it had nothing to do with the visuals, it stirred something more; deep.
Lukla was to be the starting point of our trek to the Everest Base Camp. It is a small town situated in the Khumbu region of the Himalayas. Some of the world’s tallest peaks are situated in this region, including Mt. Everest. We have to fly to Lukla from Kathmandu but due to bad weather flight was cancelled and we decided to take a helicopter ride instead so that our plan can take off and we are not stranded ..The Heli ride was amazing, giving clear views of lush green valleys , flowing rivers,and we feel like a kid beaming with joy ..

The trek started immediately after landing and it itself took us through some of the most beautiful landscapes; we were days away from our destination but we had already realized the magnanimity of the landscape. The mountains were so large that it would take us days to go around and cross over into another. We would often realize that at the end of a day’s walk (about 7-8 hours of trek) we would have gone around only half a hill. We were aware of only Mt. Everest, but we realized there were several mountains that were nearly as high and equally beautiful and intimidating at the same time.

On the second day of our trek, we reached a place called Namche Bazaar where we got a picture-perfect view of Mt. Everest. This image I saw will remain etched crisp in my mind; it was the first time I was seeing Mt. Everest. Thus far, I had only seen pictures of the tallest peak in the world, had heard only statistics. It looked intimidating, with its menacing peak towering high over all other mountains in the vicinity, guarded fiercely by Nuptse and Lhotse, whose edges cover most of Mt. Everest.

I had expected it to stand alone, in the middle of a plain, suddenly rising towards the sky. But there were several others surrounding, it was like an entire army dressed in white, standing guard. And there can only be one King, and an impenetrable fort well protected him.

On the fourth day, I was coping well and our pace was so slow which was the key to the whole process. As we turned a corner on route to the Monastery town of Tengbouche you are continually facing Everest and wondering how climbers can reach the summit when we are walking like snails down here. It seemed to go on forever but so important to pace yourself and take a lot of breaks. I must have taken 50 breaks which is fine. We didn’t want to push it too hard. We got there a few hours later and found me in another bakery.

Fifth day- The trekking got progressively tougher and it started taking a toll on my body. The physical effects were noticed at first – heavy breathing, difficulty in climbing, slower pace, tiredness, the need to rest more often. The psychological effects were more dramatic and took time for me to identify.

We were warned about the symptoms of AMS (Acute Mountain Sickness) which is commonly noticed among trekkers in this region. The tolerance levels of individuals could vary, so some might be hit at a lower altitude whereas others might be hit at a higher altitude. People living in higher altitudes might be better at handling AMS than people from the plains.
For me, it started with tiredness, thirst, and a splitting headache while we were on the fifth day of our trek on the way to Dingboche from Tangboche.. The headache got worse and I had to take tablets, but it wouldn’t go away. I lost my appetite, so I could not eat much. Since I had not experienced AMS before, it was from theoretical knowledge from my reading that I could gather that I had been hit by AMS. At that point, all I wanted was to feel a little better.

There were moments in our trek when we regretted having embarked on this arduous journey. There were times when we felt we had made a mistake; a terrible one.

This whole episode taught me one great lesson – to never underestimate the power of nature’s forces.
Here started the spiritual part of our journey that would change us as people, and would empower us to trivialize the urge to reach our destination. This change in us would just let us enjoy every moment of our existence in this beautiful place.

I felt more comfortable after my second night in Dingbouche. We could see Island Peak, Lhotse, Ama Dablam from a new angle, it couldn’t get any better and each day brought me new joys and understanding.

We moved out of Dingbouche on Day 7 and headed for Lobuche on the final stretch to Everest Base Camp, this would take us up the famous Dugla hill and at the top the cemetery for lost climbers. No bodies are here just some plaques, prayer flags and names carved into the rocks. A somber place, with stunning scenery back across the valley and jagged peaks jutting out across the skyline. A moment is taken, and we focus on our journey and move forward towards Lobuche.

The headaches stayed with me for the next few days. But now the psychological effects were more pronounced. A deep confusion, hallucinations of grasslands and a sense of indifference or aversion to most activities. By the time we reached Gorakshep, which is the older base camp (we had already crossed the 5000m mark with this), we could only manage to ingest a couple of spoonfuls of soup or desert just for purpose of consuming calories..

The views got more and more breathtaking, the landscape changing dramatically from a dull brown to an icy white. We saw the Khumbu Ice fall, a large glacier that runs all the way separating the base camp from the rest of the path to the summit.
It looked fascinating, from a distance, of course. But our journey would end here at the base camp.
Ironically, the base camp, although would bring us close to Everest, it would also cut us away from the beautiful views of the peak that we had so eagerly sought. The peak gets completely covered by the strong and protective twins Nuptse and Lhotse. We knew that it is there somewhere beyond, but we could not see it!

And we looked at each other and smiled with exhilaration, Hugs of making upto it , high-fives, taking photos against the peak in the background. It was a poignant moment, my mind was completely at peace. I was overcome by a sense of humility and respect towards these mountains.

There are several blessings in our life that we take for granted. We tend to complain about trivial discomforts like a coming late, traffic jams, power cuts , work issues and small difficulties.. And we conveniently assume that we have a fundamental right over creature comforts, and so easily take for granted what is made available to us mostly due to the fact that we were born in a certain place at a certain time.

While we were walking, we had to exert our bodies to great limits. We had to push it beyond our normal physical abilities and cajole it to move at great altitudes.

With all my senses concentrated towards trekking, I had little chance for serious, complex thoughts like “what is the meaning of life?” or “What is the purpose of our existence?” My mind was clear of any deep thoughts. It had the tranquility of a five- year old. This childlike state of mind in which I went about walking, tripping on small stones, astonished at huge boulders, trotting alongside our guide without worrying about the route, the weather or place to stay, was what gave me peace of mind. This banished any traces of doubt or fear in my mind, and retrenched the mind to way back into my childhood where I was carefree and fearless. And to me, this was spiritual.

This was an inexplicable state of mind that I longed to be in even after we returned from our trek. The feeling that made me leave behind all thoughts of family, work, environment, world behind, and pulled me from all the human flavours of envy, jealousy, sorrow, and joy to a state of stillness and calm – this was what I missed the most once I was back to civilization.
We leave our footprints, sounds, and smell in a place we visit that changes it in a certain way; But what the place leaves us with, the way it touches us can sometimes change us completely, like we have never imagined before..
Return journey was more relaxing , chatting, bonding, giggling and now the walk became a lot easier as we talked and talked and enjoyed the mind blowing scenery all around us.

Now, when we reflect on our experience, we do it with a sense of pride. For us, what started as a quest to see the larger than life mountains in all their glory, ended up as a learning experience about the little truths of life. In short, it changed our perspective about life.