Skip to content
Posted in Trekkers' Diaries, Treks in Sahyadris 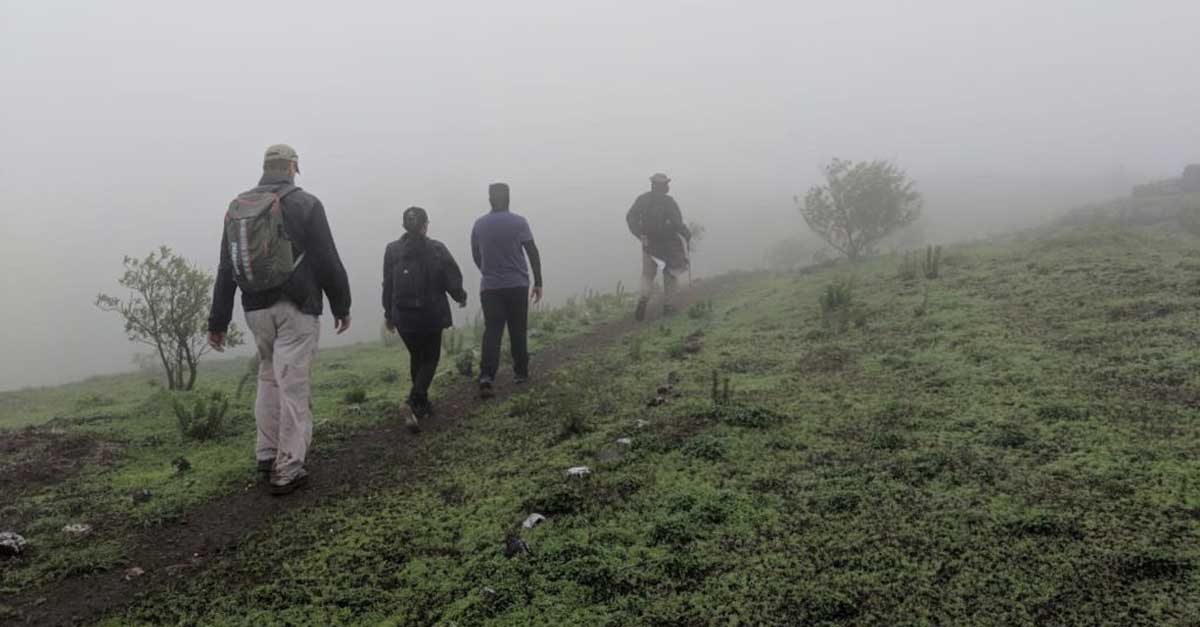 I recently had the opportunity to go for a trek to Vichitragad fort with Adventure-Pulse. Initially, I was a little sceptical about going as I had never heard of the fort. During my research, I found that the fort was 60 km away from Pune and was easy to moderate level and was not very popular and should be relatively empty.

I signed up and on the 29th of June and I was on my way to Vichitragad. The base village for the fort is Bhor. We headed down the NH4 towards Bangalore for 30min and turned off the highway and made our way to Bhor. The drive is pleasant and the roads are pretty good. After reaching Bhor, we were dropped at the local school and were given our snack boxes. Momentarily, we were briefed by our trek leaders as to where we were and how long it would take to the top.

Being experienced trekkers, we had opted to take a totally different path up the hill as opposed to the popular route. Briefing done; we started our journey up. Initially, we were walking beside some farms that were being prepared for the paddy season. After around 10 minutes we started to make our way up the hill. Due to the recent rains, there was a lot of mud and the terrain was pretty slippery. This added to the adventure and everyone was taking it in their stride. The trail was bobbing and weaving up the hill and after about 20 minutes we had covered around one-third of the way. The first third was pretty easy and was a piece of cake for most of our team. In front of was a steep section, the steepest of the entire trek.

Even though the rain had ceased the wet mud made it pretty slippery and everyone was slipping; some due to the lack of decent shoes and others due to a misplaced step. It is not an exaggeration to say that everyone slipped, including our guides from Adventure-Pulse. The terrain through slippery and steep was not impossible. This section was moderate to hard. The reason it was hard was because of the lack of traction due to the wed mud. A decent pair of trekking shoes would have definitely helped.

After this section were faced with a gradual walk over a pretty flat surface to get to the ridge.  So overall, we spent around 1.5-2 hours to get to the ridge; initially through farms, a steep section and then a flat walk. Basically, the whole deal. After we reached the ridge, we took a lot of pictures and came face to face with the powerful winds Vicitragad is known for. Also, the weather had turned and it started to drizzle. From the ridge, we trekked for around 10 minutes and were directly underneath the fort. The entrance of the fort is on the other side so we traversed across the ridge, moved to the other side of the hill following a proper path to the entrance of the trek. This took around 15 minutes. We were finally at the entrance of the gate and we took a lot of pretty pictures. The fog had also set in making it pretty memorable.

Once we made our way up the fort through a proper staircase, we reached a hut which was the temple. This is just adjacent to a small pool of water. After grabbing something to eat we roamed around and explored the area. The rain had started to pour, coupled with the wind it was a really interesting experience which almost felt like small hailstones. After getting completely drenched (something which Adventure-Pulse warned us about) I made my way to the border of the fort. We witnessed the thickest fog and mist here. It was a really good place for pictures.

We then started our journey back down from Vichitragad Fort; we would take the traditional route down which was much easier but in the direct line of fire from the torrential downpour. We left the top of the fort by around 2. The journey down was pretty straightforward with minimal steep sections. We were down in a jiffy from Vichitragad Fort and found the comfort of our tempo. The journey down though, not as challenging as the way up was up, was made harder with the rain. Caps were flying, bags getting soaked, and everyone trying to shield themselves from the rain. We reached our tempo as the sky had begun to open up.

Being well prepared to get soaked (something Adventure-Pulse had made it pretty certain from earlier) we quickly changed into our comfy, dry clothes and were in awe at what we had just accomplished. Through the slippery slopes, the gunfire like rain and the amazing area that we were in we had made it. We then made our way back home and reached Koregaon Park by 4:30 pm.

I would like to thank Adventure-Pulse for this amazing experience to Vichitragad Fort.

« Everest Base Camp Trek : One Step at a Time

Kilimanjaro – Reflections on the Mountain »