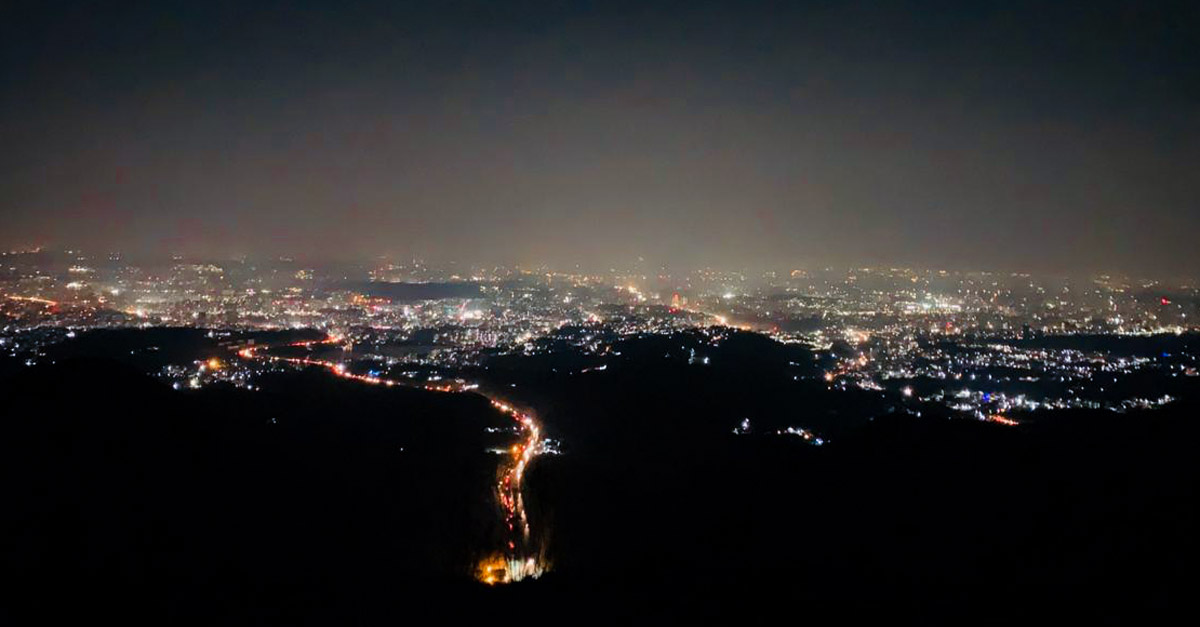 The Katraj to Sinhagad trek is one of the toughest and closest treks to the city of Pune. Popularly known as K2S, this trek is one of my personal favourites.  It can be done as a Monsoon Trek and even as a Night Trek.  It is very popular as a Full Moon Night Trek as well.  Over the last 9 years, I have had the chance to lead this treks at least twice a year, with people from all walks of life, the youngest being 8 years.

If you have a weekend free, the Katraj to Sinhagad trek (K2S) provides a perfect alternative from the drinking and bar hopping, giving you a unique glimpse of the city skyline, lite up under the night sky.

Best time to do the K2S trek:

The south end of Pune District, just off the Pune – Bangalore Highway

The challenges of the Katraj To Sinhagad Trek

The trek is approximately 13-14 kilometres long along the southern ridge that surrounds the basin of Pune City.  While walking on the ridge, you climb over 13 hills before reaching the shoulder of Sinhagad Fort.  The first hill and the last 3 hills are the steepest, with a few steep descents in between, when crossing into the next valley.  During the day, if the sun is out, the trek can be very hot due to the lack of tree cover and exposed trail.  In the night, sleep and fatigue can make the trek seem endless.

If you take up the trek during the monsoons, the terrain changes dramatically. The vegetation is lush green.  However, due to low lying clouds, it becomes difficult to distinguish the right direction towards Sinhagad.  Due to rainwater, the trails get converted to streams and waterfalls.

Finally, the most important thing to consider is the road access. The road access is only available at the start point and the finish, forcing trekkers to complete the entire trek or turn back in the first hour.

To trek solo or with a Trekking Group

As the start and finish points are different, if you’re trekking solo, it becomes tedious to organize the logistics. You can take a public bus from Swargate to the Katraj Tunnel and similarly after the trek, from Sinhagad back to the city, if you are trying to do a self-organized trek.  However, be prepared for delays and extended wait times.

On the other hand, trekking groups like Adventure-Pulse, organize a Mini Van or Bus from central pickup points in the city and even drop you back after the trek is over.

The trail from Katraj to Sinhagad (K2S) is not defined.  Depending on the time of the year, the trail can be overgrown with thick vegetation.  If you plan to do the trek on your own, it can be an incredible adventure to identify the waypoints and reach Sinhagad.  However, if you are not so adventurous, a trekking group will not only have an experienced guide who knows the trail, but also essential gear like first aid kits, ropes, and radios in case the mobile network fails.

The Katraj to Sinhagad Trek or the K2S Trek begins on the outskirts of the main city.

When driving from Bharti Vidyapeeth University to Katraj, people often get confused about the start point of the trek.

The Start point is located near the Old Katraj Tunnel from where a prominent trail leads to the top of the first hill.

This is a long climb taking almost an hour depending on your speed.

The trail can be confusing at times, but the key is to aim for the top of the Hill.  The trail crosses above the New Katraj Tunnel, and you can see cars and trucks below you on the highway.  After a long and at times, hard climb, you will reach the top of the hill, to be greeted by spectacular views of the city.  The cool breeze at the top of the ridge is refreshing, helping to soothe away the fatigue of the climb.  This is a good place to rest and drink water, before setting off on the next hill.

The next hill though taller is connected by a very defined trail. It takes only about 15 minutes to crest the top of the hill and is much easier to ascend.  However, the real challenge lies in descent. It is steep and very slippery with loose gravel and rock. Infinite care must be taken to avoid a fall or injury.

The descent can take 30 – 40 minutes and should be done with extreme caution.  Often, you find yourself wondering which was tougher – The Ascent or the Descent.

The route follows a series of undulating ridges making it difficult to count the number of hills covered.  It starts veering away from the Pune- Bangalore Highway, and after a few hours, you realize that even the city lights are behind you, far away in the distance.  The trail leads slowly closer to Sinhagad and also closer to the large expanse of the Khadakwasla Damn on the right.

Always, the best is saved for the last.  The final section of the trek is made up of 3 distinctively steep hills. It starts with a long descent followed immediately by a very steep climb. This section is extremely tough especially as you have now spent the last 5-6 hours trekking.  This section has both steep ascents and descents making it difficult both on the feet and knees.  Take your time and don’t rush this section, especially as chances of injury are high when your note watching where you step.

My tips and recommendations for completing the Katraj to Sinhagad (K2S) Trek are as follows:

This is a tough & long trek with lots of ascends and steeply descends.  I would recommend this trek for more experienced hikers.

Ensure you have the right shoes for this trek.  The trail can be very slippery and steep. Avoid running shoes as the terrain will destroy the sole of these shoes.  Ideally use trail walking shoes or trekking shoes. These provide good grip, have excellent ankle support, and usually have more space inside to prevent your toes, from constant impact with the front of the shoe.

If your hiking on the Katraj to Sinhagad Trail (K2S) at night, ensure you carry a torch.  I recommend a head-torch which allows you to keep your hands free.

Carry plenty of water.  It’s a long hike without any sources of water along the way.  I would recommend at least 3 litres of water, or more, based on your consumption.

Go with an Experienced Guide.  There are no defined trails, to show you the way from Katraj to Sinhagad.

Often, several peripheral trails branch off to neighbouring villages, creating confusion.  It’s very easy to get lost on this trek.

The steep descents on this trail are notorious for twisted knees and sprained ankles.  Take these sections slowly and if required, slide wherever you feel you may lose your balance.

Along with shoes, the right clothes are equally important. Wear long pants to avoid being scratched by the thick undergrowth of plants and grass. Keep a light jacket if doing this trek in the winters.  In the monsoons, carry appropriate rain gear.

Do not do this trek in slippers, floaters, or sandals.

Ensure you have slept well the day before the trek.  If you are doing the Katraj to Sinhagad Trek at night, I strongly advise you to have plenty of rest and sleep during the day.

After the trek, ensure you have plenty of water and electrolytes to aid in recovery.  Your muscles will be cramped from the dehydration and fatigue. To expedite recovery, go for a short walk the day after the trek as well.

Stretches help.  The most important TIP is ‘Drink lots of Water’.

Samir Patham, A qualified mountaineer from the prestigious Nehru Institute of Mountaineering, Uttarkashi and having also done his MBA in Human Resources from SIMS, Samir spent his initials years working for Infosys.