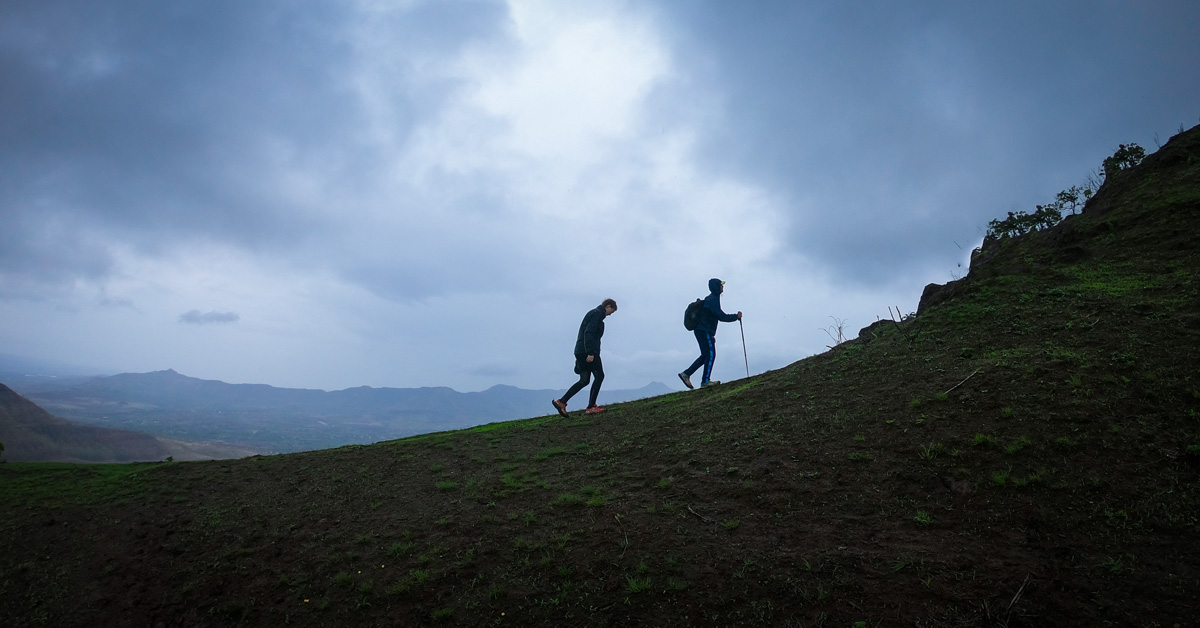 Pune is a trekker’s paradise with the Sahyadri range spanning over hundreds of kilometres in every direction around the city. It’s almost as if the Sahyadri hills form a ring around the city making trekking near Pune very accessible. Whichever exit you take from the city, there are dozens of treks one can do. Even though there is no defined trekking season in Pune and trekking enthusiasts flock the hills pretty much all around the year, the monsoon season of great significance as these trails turn into lush green forests and waterfalls in every corner. Monsoon Treks near Pune are a favourite for most trekking enthusiasts and a personal favourite for me as well. 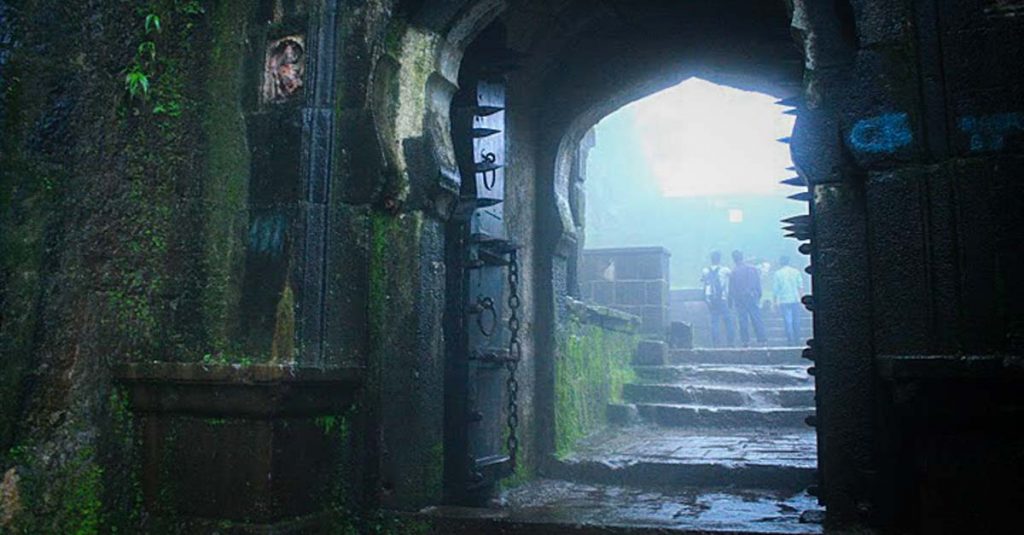 Having done this trek many times, I would categories Lohagad fort as one of the easier Monsoon treks near Pune. It’s accessible and located around 75 km from Pune. It is connected by train also to the Malavali station. It’s a trek where you can even take younger kids with you. A few years back, there’s a road that was build halfway to the fort thus making it more accessible. The fort has some caves on top that can be explored.

Trek Duration: 2 hours from Malavali and 40 minutes from Lohagad Wadi 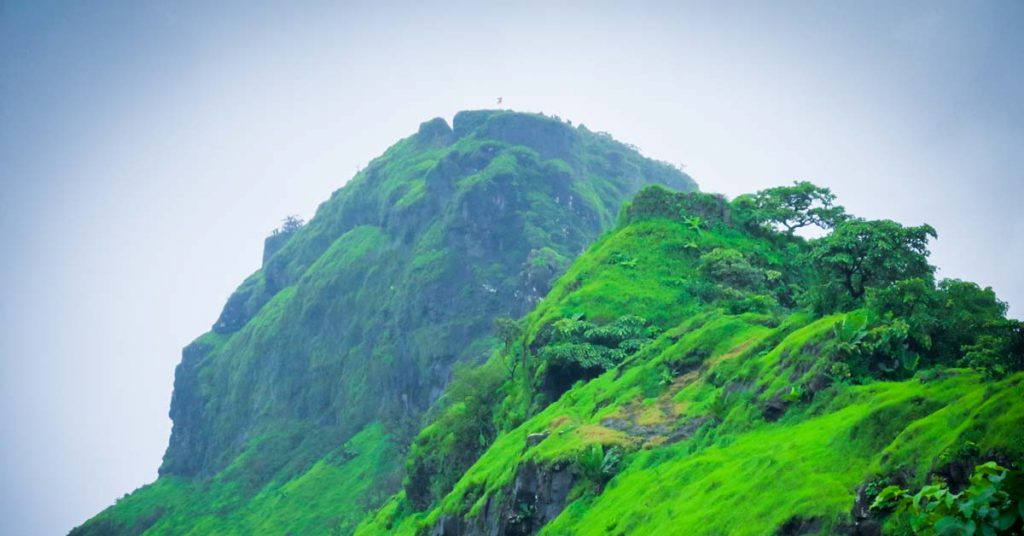 The Tikona fort trek is another easy trek near Pune. Though Short, it’s a little steep and is a distinctive pyramid shape which can be spotted from far. If you are looking for a short getaway with family, Tikona fort is a good place to go. It had beautiful views of the Pawna lake and has a famous Mahadev temple on top. 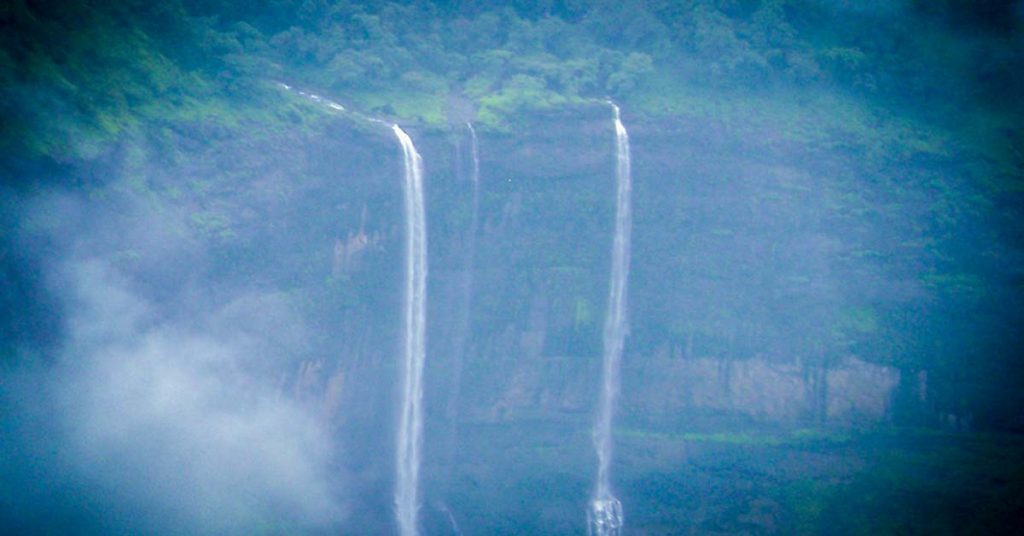 Located close to Lonavala, the Rajmachi trail is a popular monsoon trek near Pune, a major reason for this is the dozens and dozens of beautiful waterfalls the trail has to offer during the monsoon season. However, a thing to note is that the trek is about 18 km’s long and is not recommended for beginners. 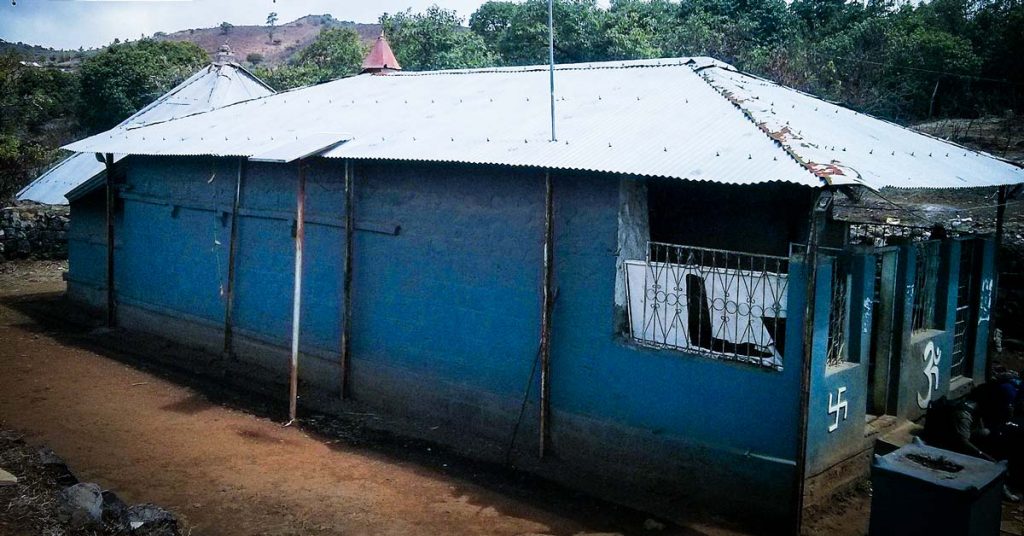 More famous for the Historic Raireshwar temple on top, the Raishwar fort is located about 30 km’s from the popular Bhor village. The trail is short and shouldn’t take you more than 1.5 hrs or so to get to the top. Being a short trek with a historic temple on top, it’s a popular trek around Pune for families. 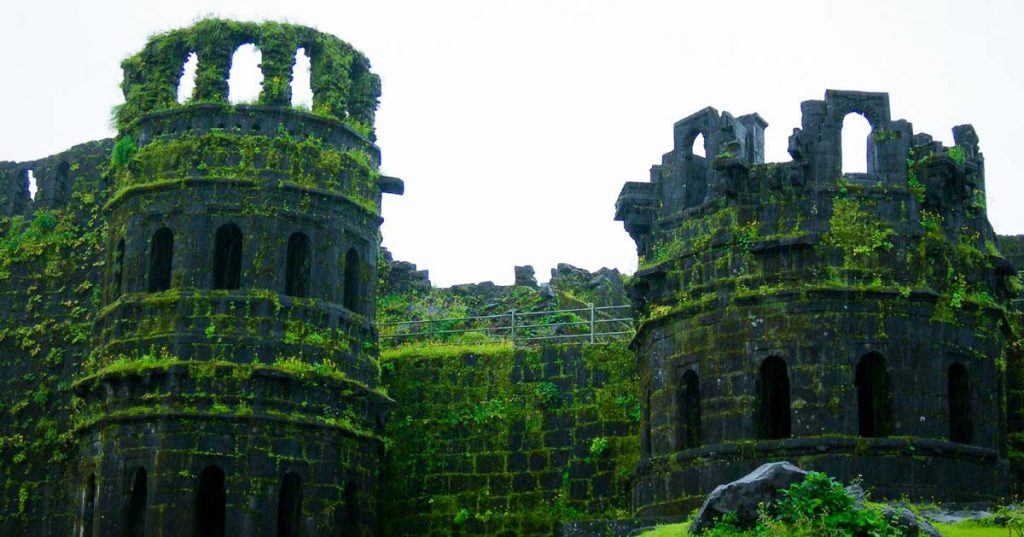 Located about 125 km’s from Pune, Raigad is a popular fort amongst trekking enthusiasts as it used to be the Capital of Chatrapati Shivaji Maharaj Ji at one time. The trek is about 3-4 hours of climb and it has about 1500+ steps towards the end of the climb. Won’t recommend this trek for small children. Avoid this trek in summer as it gets hot, Monsoon and winter are the best months to do this. 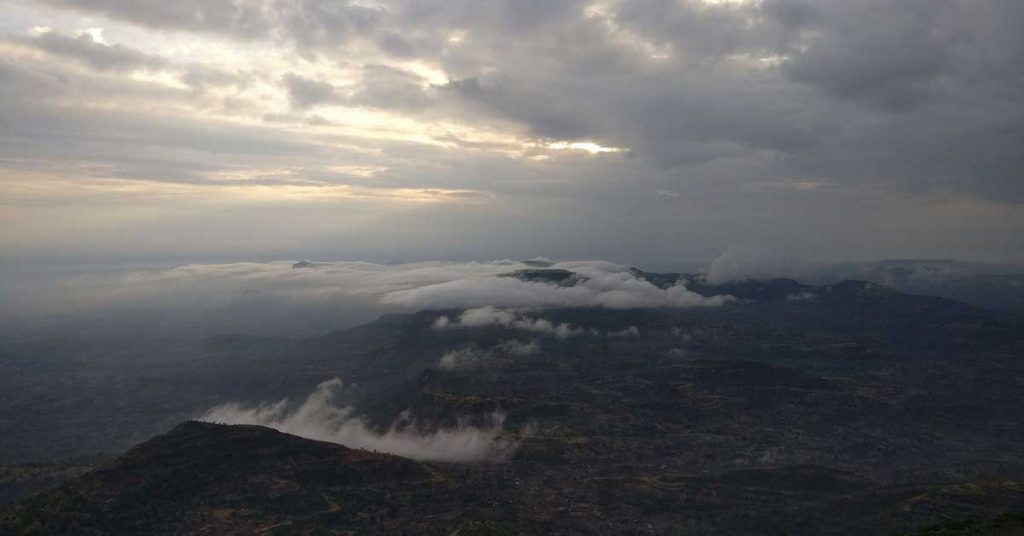 The highest point in Maharashtra, this trek completely transforms itself in the rainy season, making it a popular monsoon trek near Pune and Mumbai, with Lush green forests, cloud cover, and waterfalls. It’s a different feeling of accomplishment for may trekkers to be able to reach the highest point in the state. It’s a little far from Pune and often difficult to do in one day, most trekkers leave the previous night or very early in the morning to return to Pune by late night the same day. 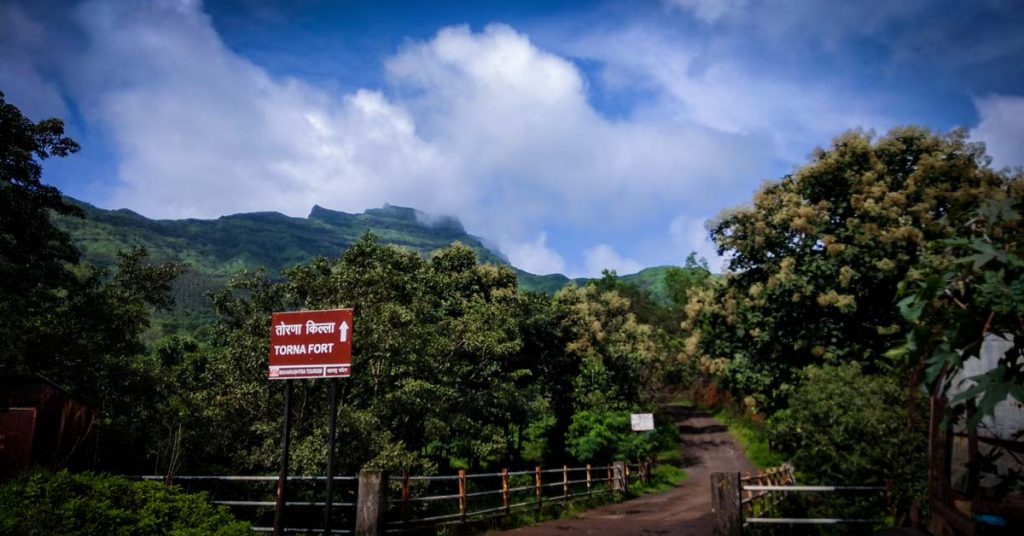 Torna was my very first monsoon trek near Pune about 20 years back. Unlike most other treks, it has a unique wind tunnel that forms on the ridge. Located about 75 km’s from Pune, the base village is called Velhe. Very recently, the government has built a road up to the first ridge of Torna, reducing the trekking time to 2.5 hours as compared to the earlier 4 hours. It’s a beautiful trek and a must recommended trek for all trekking enthusiasts in Pune. 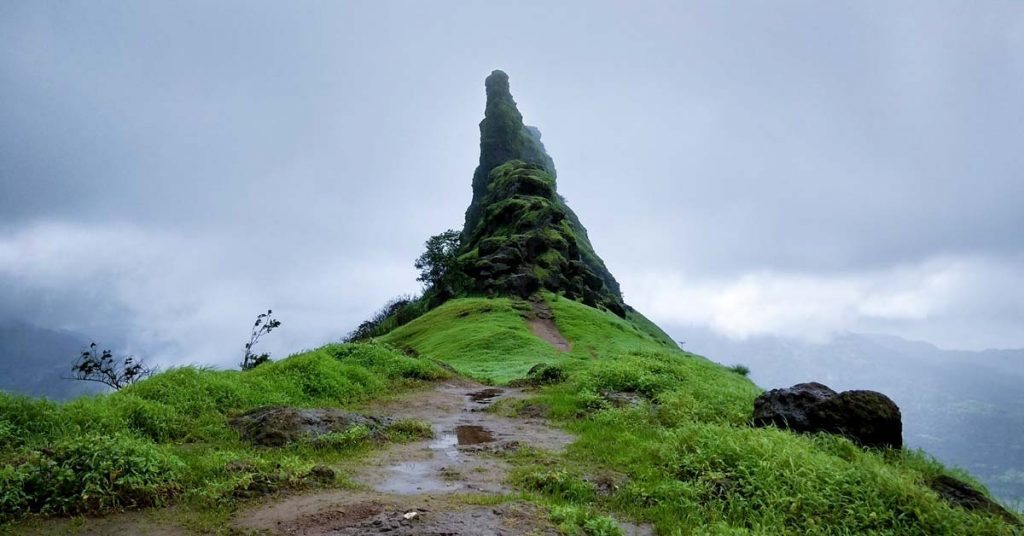 I first did the Irshalgadh trek in 2012. That time it wasn’t a very popular trek. However, in recent years, it has gained popularity because of the proximity to Mumbai and Pune. One can reach the base of the fort in 2 hours from Pune using the expressway. It has a unique pinnacle on the top and is also a twin fort to the famous Prabalgadh. It’s a fairly easy trek and recommended for children and families as well. 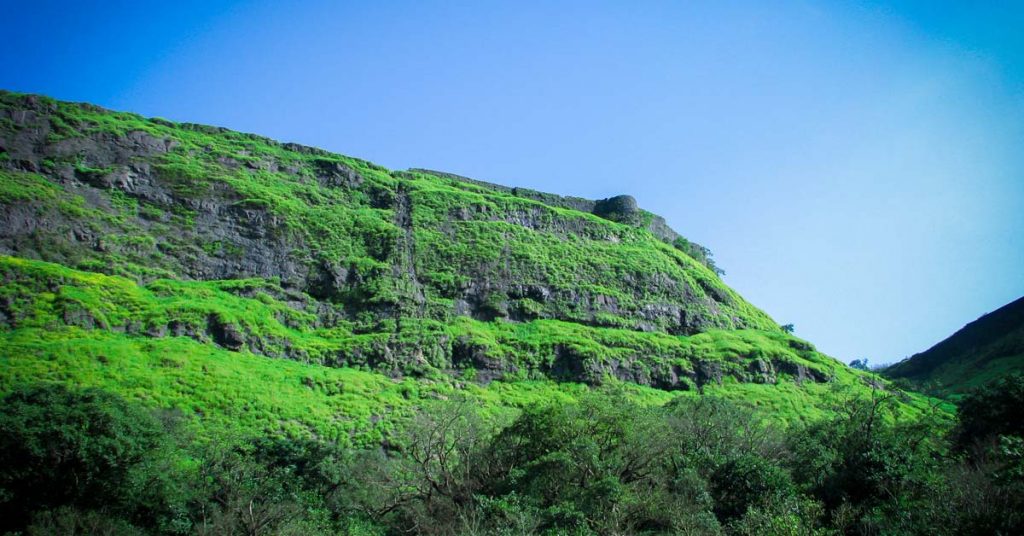 The Visapur Fort is a twin fort to the Lohaghad fort. They have exactly the same approach almost until halfway. Once you reach the common halfway point, Visapur would be on your left, and Lohaghad will be on your right. It’s a popular monsoon trek near Pune as the final climb is through a waterfall and a lot of fun. The top is a huge plateau with a big area to walk around and explore. 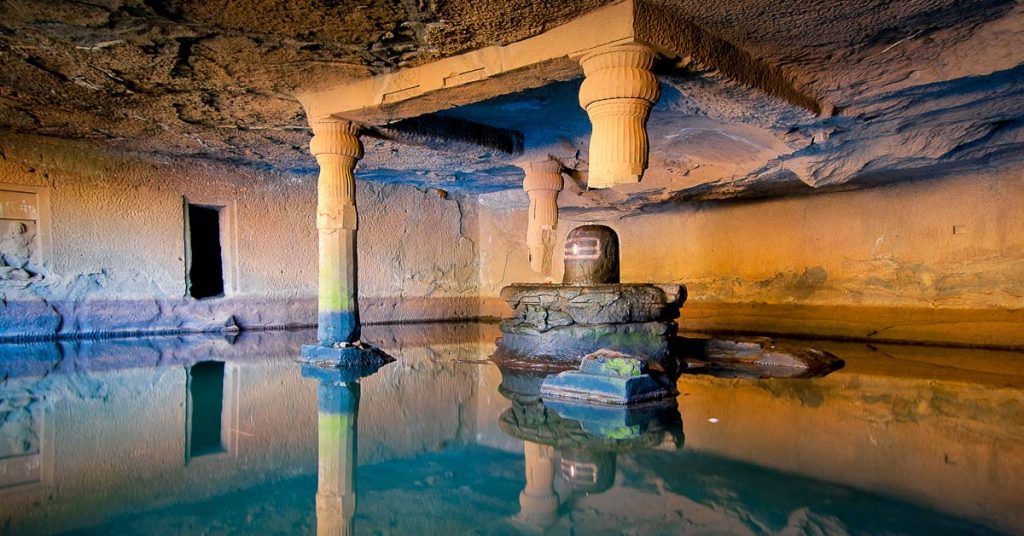 The Harishchandragad trek is undoubtedly one of the most popular treks in the Sahyadri range. This is primarily because of the famous Konkan Kada, which offers one of the best views of the Konkan. The trek is difficult and long and a lot of trekkers use to stay here overnight. However 2 years back, the government officials have put a restriction on overnight camping here, so one has to go up and come down the same day which is possible if you are a reasonably seasoned trekker. Won’t recommend this fort for beginners and children.

The Vasota Jungle trek is a unique trek as it’s the only trek where you have to take a 45-minute boat ride to reach the start point of the trekker making it quite popular. Its located in the Koyna wildlife sanctuary in Satara district and is very rich in its flora and fauna. It’s about 150 km’s from Pune and is often done as an overnight trek because of the travel time involved. 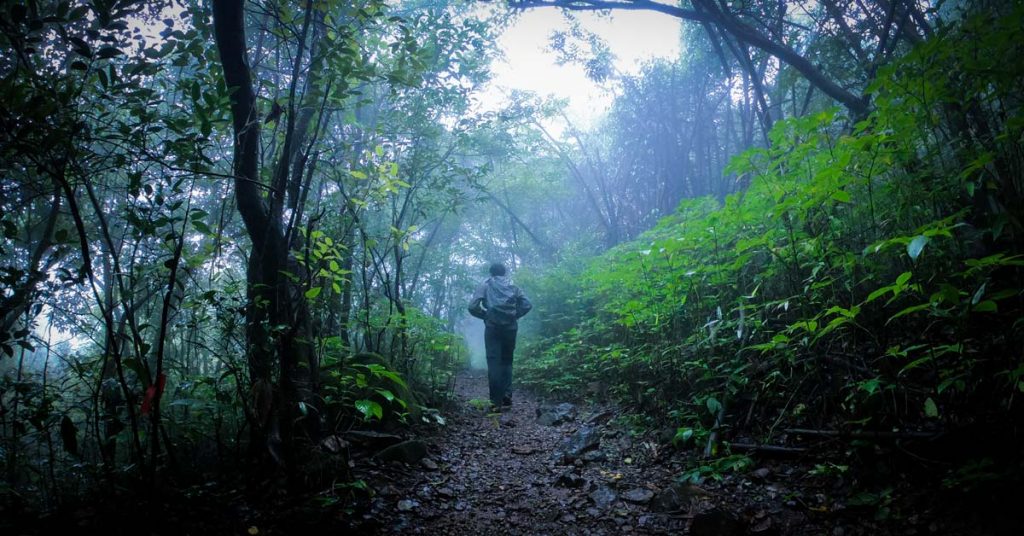 Literally translating into the Dark Forest, Andharban Trek is a very popular trek around Pune. The trail is about 14 km long and most part of it is covered under dense forests. I would personally advise doing this trek just at the beginning of the monsoon, end of the monsoon, and in winter. Avoid the trek during peak monsoon as there are chances of landslides during that time. 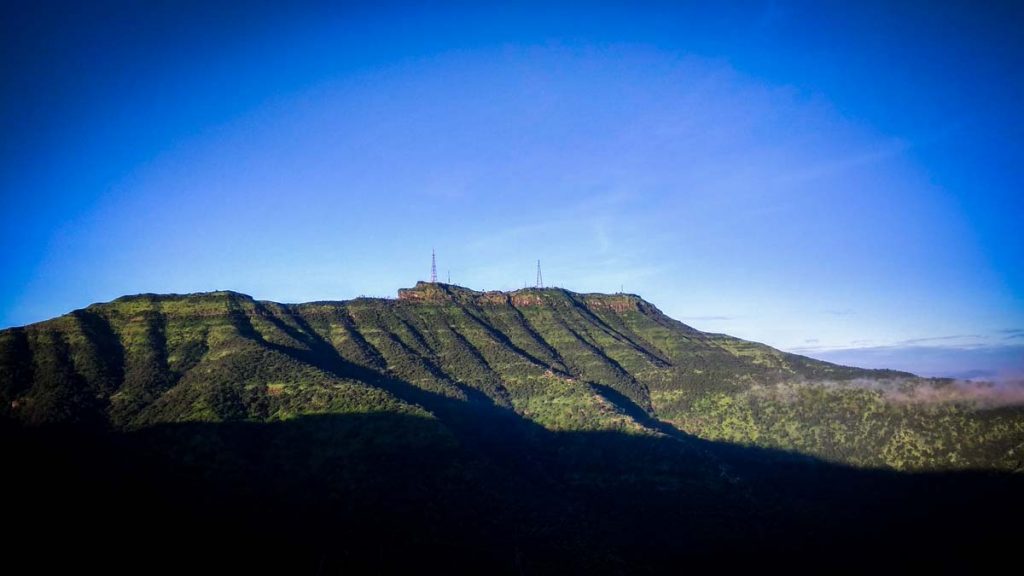 The Sinhagad trek is almost synonymous to Pune city. It’s the most accessible trek to Punekars and is frequented by thousands of trekkers every week. Located only about 25 km’s from Pune, it is definitely one of the must-do treks near Pune. It involves around 1.5 hours of trekking and Sinhagad trek can be done by all age groups. 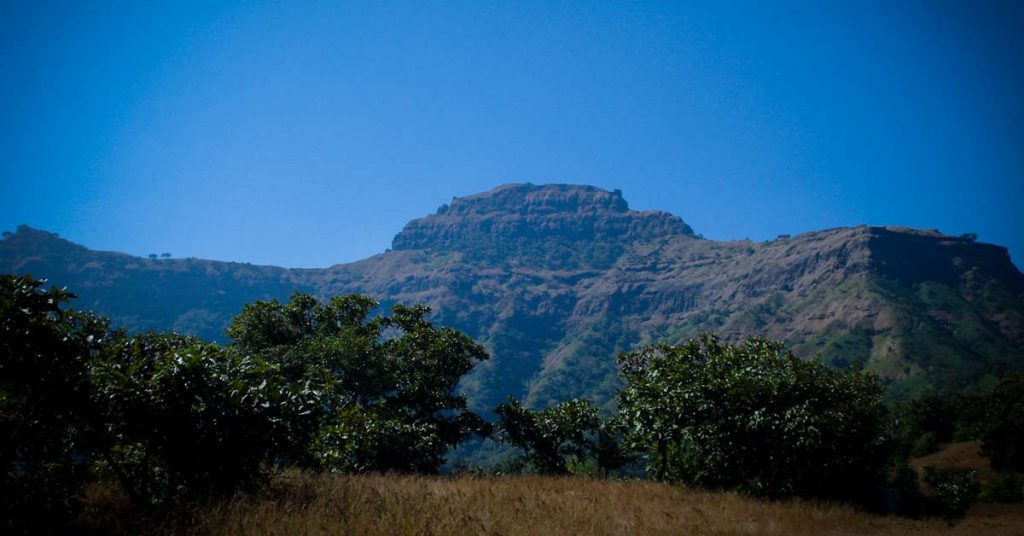 The Rajgadh fort is located about 40 km’s from Pune thus making it a very popular Monsoon trek near Pune. The terrain is very similar to Torna fort and one can even trek from the top of Rajgahd fort to Torna fort. It’s a relatively easy trek and recommended for all age groups. 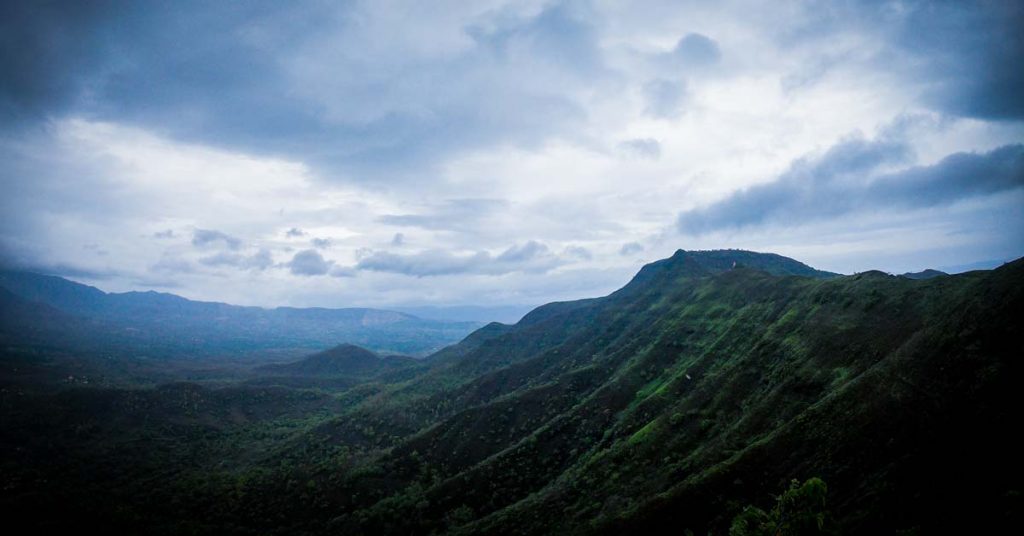 Also called the Vichitragadh trek, Rohida fort is famous for the wind tunnels it creates on the trekking route. A unique thing about this trek is that it can be climbed from two sides. Its located near Bhor and is a fairly easy trek, recommended for children and families. I would definitely add this to the list of must-do monsoon treks near Pune.

Tips for Monsoon treks near Pune:

Do not trek alone in the monsoons. The trails are often slippery and you should always have friends or a group around you while trekking, especially in the monsoon.

Avoid trekking in floaters and use shoes with a good grip. Trails are more slippery and shoes will protect from getting a twisted ankle or an injured toe.

If very heavy rainfall is predicted the avoid going for a trek. Heavy monsoon sometimes can cause a landslide or can result in the closing of a trekking route, so always check the forecast and venture out.

The monsoon around Pune is heavy and can drench you completely. We suggest carrying an extra change of clothes as travelling back home completely drenched and can make you fall sick.

The monsoon season is very pleasant, unlike summer, however, keep drinking water and keep yourself hydrated since your body is doing a lot of hard work, it would always need water, irrespective of the season.

Look out for each other and always keep safety the first priority, especially on monsoon treks. Keep to the main trails and don’t try new routes on the rainy season.

« Treks around Bangalore: The 5 best treks near the ‘Silicon Valley of India’.

A qualified mountaineer from the prestigious Nehru Institute of mountaineering, Sauraj Jhingan, brings with him, tremendous Human Resource experience, having worked in diverse business verticals, such as ITES, IT and Standard Chartered Bank.